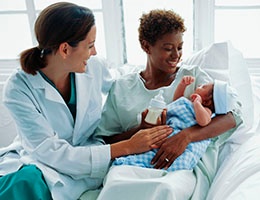 Malpractice claims continue to plague the specialty of Obstetrics. In the 2015 ACOG Survey on Professional Liability, a total of 4,294 physicians responded; 73.6% had at least one claim filed against them during their careers. There were 1,117 total claims reported by the surveyed OB-GYN physicians, with 63.5% of these claims involving obstetric care, and the remaining 36.5% involving gynecological care.

Nearly 50% of the survey respondents indicated they had made changes in their OB practice “as a result of the risk or fear of professional liability claims or litigation.” Most of these changes involved the limitation, reduction or elimination of services to their patients. Changes in practice included:

The ACOG survey provides insight regarding the impact of malpractice claims on clinicians and confirms the need for continued efforts to reduce claims in the practice of Obstetrics. Also in 2015, the Institute of Medicine published the report “Improving Diagnosis in Health Care,” which included the recommendation that: “Professional liability insurance carriers and captive insurers should collaborate with health care professionals on opportunities to improve diagnostic performance through education, training, and practice improvement approaches and increase participation in such programs.” To this end, we welcomed the opportunity to examine the key issues found in 882 recent obstetrical claims in collaboration with The Doctors Company, a physician-owned medical malpractice insurer. The following are a few highlights of this review of OB claims from their database.

The Most Common Allegations in Obstetrics

The top three allegations found in this series of 882 OB claims were:

The most common allegation in this series of obstetric claims was “delays in treatment of fetal distress.” Malpractice claims continue to allege delays in treatment of “fetal distress” despite the fact that this term is not used in the clinical setting. Clinically, “fetal distress” refers to Category II or III fetal heart tracings as defined by the National Institute of Child Health and Human Development (NICHD). Allegations of delayed treatment of fetal distress were most often paired with additional allegations of neonatal brain injury (hypoxic-ischemic encephalopathy, asphyxia, or subdural/cerebral hemorrhage).

The good news is that the claims data from 2011-2014 showed the favorable trend of a mild (8%) decrease in claims alleging delay in treatment of fetal distress when compared with the preceding time period of 2007-2010. Correspondingly, there was a 13% decrease in “brain damage” claims.

7 Reasons for Delay in Treatment of Fetal Distress

A common issue in claims alleging delays in treatment of fetal distress is that the OB practitioner and/or nurses either did not recognize abnormal fetal heart tracings or did not perform appropriate interventions in a timely fashion in the face of abnormal fetal heart tracings. Here are 7 reasons for delays in treatment of fetal distress:

5 Recommendations to Avoid Delays in Treatment of Fetal Distress

The key to avoiding delays in treatment of fetal distress is for the team of OB physicians, midwives, and nurses to train and work together.

Despite the trend of fewer claims alleging delays in treatment of fetal distress, there is considerable room for improvement. Claims reviews can be an invaluable tool to increase the OB team’s awareness of the key issues found in malpractice cases; it can also serve as a springboard from which actionable solutions can be developed to improve patient safety and reduce claims.