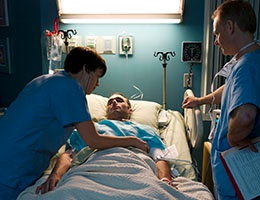 There are four time-sensitive emergencies that that every practitioner of acute care medicine should master to deliver the best possible care in the safest manner: Code Trauma, Code STEMI, Code Stroke, and today's topic – Code Sepsis. Depending on the specialty, practitioners are involved in sepsis care at one or more stages of sepsis. In the office, urgent care or ED, the first two stages are paramount – early recognition and aggressive resuscitation. Hospitalists and admitting practitioners continue the initial management through recovery.

In contrast to Codes Trauma and STEMI, Code Sepsis does not present as a dramatic condition. It is akin to Code Stroke in that it is also a “syndrome of subtraction.” The patient with sepsis has less of nearly everything – blood pressure, mental clarity, physiologic reserve, etc. Two exceptions may be the pulse rate and lactate level, both of which are usually present in greater abundance.

The Lack of Drama and Urgency

The symptoms and signs of sepsis often appear painlessly and quietly over days; the event is not heralded by an event such as a car crash or crushing chest pain. Stop and visualize the arrival of a trauma or STEMI patient; the patient is in obvious distress, and the team is on high alert to act immediately. Contrast that visual to the arrival of a patient with sepsis – is there the same adrenalin-rush reaction to evaluate and treat this condition even though it is equally as life-threatening if not more? Usually not. In fact, the ED team with whom I worked used to laugh at me when I asked them to announce “Code Sepsis” overhead. There is often an absence of urgency based on the lack of appreciation for the deadliness of sepsis.

Let’s ignore for the moment any controversy over new definitions, screening tools, and guidelines and leave that for another day.  Sepsis sneaks up on the patient and practitioner alike and requires close attention to the patient’s history and vital sign trends. Before relying on sophisticated diagnostics, stop and look at the basics – pulse, BP, and mentation at least – that can tip you off to the presence of a serious illness. Recognizing sepsis is the first half of the battle; the second half consists of acting quickly to obtain diagnostic testing and initiate fluids, antibiotics, and pressors if needed.

Reasons for Litigation in Sepsis Care

You are expected to be the sepsis expert! Be aware that there are 26,000 Google hits for “malpractice attorney litigation sepsis.”