With preeclampsia affecting 10% of all pregnancies and rates rising by 25% in the past two decades, it is important to test your knowledge and ensure that all your patients have a strong understanding of the dangers of preeclampsia. This blog will be divided into a two-part series. Part I focuses on definitions, risks, prevention and diagnosis of preeclampsia; part II focuses on HELLP syndrome, preeclampsia treatment, eclampsia, future risk and resources.

The Preeclampsia Foundation reports that one in 12 pregnancies in the United States will be impacted by preeclampsia. Globally, preeclampsia is responsible for 76,000 maternal deaths and 500,000 infant deaths annually − approximately 5 deaths every hour. Preeclampsia needs to be recognized as a strong contributor to these statistics as maternal mortality rates continue to rise in the U.S. Preeclampsia is a leading cause of maternal morbidity and mortality and a major contributor of preterm birth. Consequences of preeclampsia include stroke, seizures, permanent organ damage, preterm birth, future cardiovascular disease, and maternal death. These outcomes highlight recognition and treatment failures within our healthcare system.

Preeclampsia is a disease unique to pregnancy and postpartum; it typically occurs after 20 weeks of pregnancy and impacts both mother and baby. Preeclampsia/eclampsia can occur up to 6 weeks postpartum, and it even impacts future maternal health and pregnancies. There are 100 serious non-fatal preeclamptic events for every preeclamptic-related death; hence, the seriousness of the disease cannot be overlooked. It is a progressive systemic vascular disease that impacts all organ systems. Previously, it was thought to be a blood pressure disease only occurring during pregnancy, cured by delivery of the baby, and requiring proteinuria for diagnosis; newer information highlights that it is not just a blood pressure disease, proteinuria is not required for diagnosis, and delivery of the baby does not resolve vascular damage and long-term sequelae. Early recognition, early intervention, and standardization of care for these patients does help to improve outcomes.

Hypertension is the leading symptom of the disease, but it is not the cause of the disease. The actual cause of preeclampsia remains unknown; however, much research in this area has brought forth some sound theories regarding dysfunction of placental implantation. Imprecise anchoring of the placenta to the uterus causes ischemia and under-perfusion; these lead to an over-expression of a maternal inflammatory response that has systemic ramifications.

Preeclampsia is thought to be caused by over-production of anti-angiogenic proteins produced by the placenta. Anti-angiogenic proteins released in early pregnancy help to restrict and control placental growth, which peaks between weeks 26 and 28 of pregnancy. Preeclampsia causes these proteins to be over-produced, leading to growth restriction of the placenta. This over-production of proteins occurs in response to an alteration of placental implantation. The implantation or trophoblastic invasion of the spiral arteries remains incomplete. Incomplete or altered placental implantation leaves the placenta in a state of low oxygenation and poor perfusion (ischemia) throughout the pregnancy, resulting in over-production of anti-angiogenic proteins later in the pregnancy; this ultimately leads to systemic vascular endothelial dysfunction. Elevation of maternal biomarkers of sFlt, endoglin, PGM and PIGF are thought to potentiate the disease. As levels of these biomarkers rise, the disease increases in severity because these markers block vascular endothelial growth factor (VEGF), which helps to maintain vascular health. If both the sFlt and endoglin are elevated, the patient usually develops severe preeclampsia and ultimately HELLP syndrome. (Elevation of these markers can also be seen after removal of the placenta post-delivery. Post-delivery elevation of these proteins may be responsible for 30% of patients being diagnosed with HELLP syndrome within 48 hours following delivery.)

It is important to remember that this disease is always progressive, far-reaching and evolving. Poor systemic vascular perfusion leads to a multitude of symptoms:

Once CNS and renal symptoms have occurred, the disease progression is considered to be advanced. More severe symptoms include shortness of breath related to pulmonary edema, worsening epigastric pain related to hepatic distension, headache related to poor cerebral perfusion, and worsening vision issues related to retinal artery edema and spasm.

Definitions surrounding hypertension in pregnancy have evolved over time; it is currently categorized as follows:

Preeclampsia: Hypertension after 20 weeks gestation and may or may not be with proteinuria; systolic ≥140 or diastolic ≥90 (there may be signs and symptoms or lab abnormalities but no proteinuria)

Eclampsia: Seizures in a preeclamptic patient 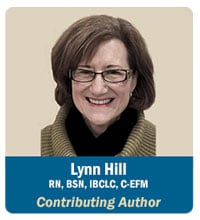 The term “pregnancy-induced hypertension” is not endorsed by ACOG or recommended for use because it is an “umbrella” or “catch-all” term that includes gestational hypertension, preeclampsia, eclampsia and superimposed preeclampsia.

New recommendations categorize the disease with identification of symptoms relating to organ dysfunction. New terminology of “preeclampsia without severe features” or “preeclampsia with severe features” replaces the older terminology of “mild preeclampsia” or “severe preeclampsia.” As a matter of fact, the term “mild preeclampsia” needs to be retired because there truly is nothing mild about this progressive and deteriorating disease that places both mom and baby in a high-risk situation. Fetal gestational age does not alter the diagnosis of either of these entities.

Note that proteinuria ≥5g in 24 hours or ≥3+ on two random urine samples collected 4 hours apart is no longer required for diagnosis.

Severe features of preeclampsia can occur antepartum, intrapartum or postpartum.

ACOG recommended an expanded list of risk factors for preeclampsia in a recent Practice Advisory. Awareness of risk factors for preeclampsia can help everyone to focus on early recognition, which ultimately leads to earlier detection and treatment. A detailed medical history and routine blood pressure measurements are the best tools available to alert the healthcare provider of a potential risk.

Early identification of at-risk women or those diagnosed with early-onset preeclampsia is important because it allows for referral for increased surveillance and the initiation of therapies to combat severity.

There have been several companies working to develop biomarker screenings to positively predict the disease, but thus far none have been successful. There has been some success with negative-predictive value screening. However, at present, ACOG has found there are no accurate, predictive tests to determine whether a woman will develop preeclampsia; therefore, ACOG continues to recommend against methods other than a detailed medical history and blood pressure screening.

The expanded list of risk factors for preeclampsia includes the following:

The disease tends to occur earlier in gestation if any comorbidities are present. Obesity and diabetes are major risks linked to preeclampsia.

Low dose ASA may delay onset in high-risk patients; it should be started in the second trimester and continue into the third trimester as a means of prevention. ACOG states that ASA treatment is being underutilized and needs updated clinical focus. Indicators to start ASA treatment include increased BMI, diabetic, PCOS, and previous pregnancy with preeclampsia. (Epidural placement remains acceptable if the patient is taking ASA.) Since ASA has the benefit of VTE prophylaxis, it is good to continue treatment post-delivery.

It is interesting yet odd that smoking is the only environmental exposure known to protect from preeclampsia. Smoking has been noted to reduce the risk of preeclampsia and gestational hypertension even though it is known to lead to abruption, fetal growth restriction, stillbirth and preterm labor. Smokers have a decrease in sFlt. This is most likely due to micro-concentrations of carbon monoxide that have a vascular protective effect and inhibit the placenta from producing sFlt.

Another interesting fact is that preeclamptic patients are known to have protection against certain types of cancers, most likely due to exposure to anti-angiogenic molecules.

A comprehensive health history is of paramount importance; obtain an accurate baseline blood pressure assessment and consider preexisting risk factors such as previous pregnancy with preeclampsia or preexisting hypertension.

Use an appropriate size cuff to take blood pressure; cuff size should be 1.5 times the circumference of the upper arm. BP should ideally be taken after 5 to 10 minutes of rest without exposure to tobacco or caffeine for at least 30 minutes prior to the measurement. The woman should be sitting upright (not supine) with the bare arm at heart level for accuracy. A manual cuff measurement has been shown to be more accurate than an electronic reading. Per CQMCC, placing the patient in a reclining position to measure BP gives a false lower reading and should not be used. The BP measurement of an obese patient can be challenging; thigh cuffs may sometimes improve accuracy if the upper arm circumference is >34 cm. If the upper arm measures >50cm, the AHA recommends using a cuff on the forearm and feeling for the radial pulse at the wrist to estimate systolic pressure; however, forearm measurements are not always accurate.

Diagnosis requires at least two measurements of a BP of ≥140/90 more than 4 hours apart. Acute-onset hypertensive crisis occurs when the BP is ≥160/110 and persists for at least 15 minutes; emergency intervention is required to control BP immediately to prevent maternal cerebral hemorrhage or cerebral infarction that can lead to permanent disability or even death. Systolic BP tends to be a better predictor of stroke than diastolic pressure; therefore, any systolic pressure ≥155-160 should not be taken lightly and requires swift intervention.

Diagnosing preeclampsia no longer requires a 24-hour urine collection; the use of the PC ratio (albumin to creatinine ratio) has superseded urine collection. ACOG states that the PC ratio can be diagnostic. A PC ratio of >0.3 mg likely represents a 24-hour urine specimen of >300mg/dl of urine, and can therefore be used with diagnostic confidence as can any symptom representing end-organ damage (kidney, liver, pulmonary). A PC ratio of >0.7 mg protein/creatinine is a strong predictor of proteinuria, whereas a ratio of <0.15 mg can rule it out (it is predictive of <300mg protein in a 24-hour collection). Most international organizations endorse the use of the spot urine protein:creatinine ratio of ≥0.26 to 0.3 mg protein/mg creatinine for the diagnosis of preeclampsia.

Diagnosis of preeclampsia with severe features includes: BP of 160/105 to 110, thrombocytopenia <100,000, impaired liver function (AST/ALT 2-times normal), oliguria <500ml/24 hours, serum creatinine >1mg/dl, CNS symptoms, and pulmonary edema or cyanosis. Remember that proteinuria is no longer required for diagnosis. Diagnosis can be recognized with the expression of symptoms and elevated BP. Therefore, hypertension and any of the following can give rise to diagnosis: impaired liver function, renal insufficiency, pulmonary edema, cerebral or visual symptoms, or thrombocytopenia.

The CMQCC preeclampsia toolkit offers guidance to navigate symptomatology with the help of the Preeclampsia Early Recognition Tool (PERT). This tool helps providers elevate the level of care and intervention based on maternal-fetal symptomatology. It would benefit your OB unit to use the toolkit, particularly the PERT, to stay proactive with early recognition and intervention.

It is important to note that when blood pressure is elevated, one needs to also consider alternative non-obstetric diagnoses such as cocaine or amphetamine use, pheochromocytoma, spinal cord injury, withdrawal from antihypertensive medications (pertinent if mother is a chronic hypertensive), or any other possible diagnosis related to elevated blood pressure.

Women need to be aware that once they are diagnosed with preeclampsia, they are considered a high-risk pregnancy and close monitoring and follow-up is imperative; missing prenatal visits can lead to dire consequences.

You might also be interested in Part 2: Preeclampsia Treatment, where we briefly review preeclampsia treatments, HELLP syndrome, eclampsia, future risks, and available HCP and patient resources.