Overcrowding in the Emergency Department

Too many patients in too little space subjected to inefficient processes. This is the essence of overcrowding in the Emergency Department. In the 40 years since 1975, the number of hospitals has declined from over 7,000 to about 5,700. Hospital bed capacity fell during the same period from 1.5 million to fewer than a million. Meanwhile, the number of ED visits has increased almost every year, totaling 136 million by 2011. The resulting formula for overcrowding is obvious: fewer hospitals + fewer beds + increased ED visits = overcrowding. Most hospital EDs (90%) experience overcrowding at some point. The practical consequence of overcrowding is boarding – when patients are kept in the ED for hours or days after the decision to admit them has been determined.

Staffing is Not the Simple Solution

The response to overcrowding in the early years was to work a little faster, apply a few Band-Aid solutions, and never mind the extra waiting times, especially for low-acuity patients. Hospital administrators suggested increasing physician staffing, hoping that throwing more bodies at the problem would resolve the issue. When adopted, the up-staffing solution often had little or no effect on throughput and overcrowding; it actually resulted in increased thumb-twiddling by ED practitioners as they waited for patients to be moved out of the ED so new patients could be “brought back” from the waiting room for evaluation.

Overcrowding and Boarding are Bad 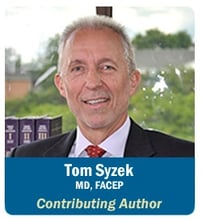 So far there is no data proving that overcrowding is beneficial by any measure. On the contrary, the volume of literature showing the detrimental effects of ED overcrowding continues to grow. Overcrowding breeds patient and staff dissatisfaction, increases length of stay, compromises privacy and confidentiality, impairs communication, and affects the entire community by increasing ambulance diversion. It passively encourages patients to elope from the ED – they leave without being seen. It is my observation that emergency physicians and staff are not of the mindset nor in the right environment to provide optimum care to admitted patients who are boarded in the ED. To complicate the issue further, boarding blurs the line of physician responsibility for the admitted patient held in the ED and can increase the medical-legal risk for emergency physicians.

Lower satisfaction scores, privacy, communication, and higher LWBS rates are only the tip of the iceberg. What about quality of care and morbidity? Studies show that overcrowding can be harmful and even deadly.

Consider the conclusion of a few sample studies on ED overcrowding:

The ED cannot be directly equated to an industrial production line, but there are similarities. Patients enter (input), evaluation and treatment occur (throughput), and patients are either admitted or discharged (output). Unlike a factory, however, very little can be done to affect input. Short of a legislative ban, patients will continue to swarm EDs for the near future.

Time and effort spent on throughput can produce incremental improvements, but only if the solution is systemic and has leadership, buy-in, and sustainability. Teams using methods such as Kaizen, Six Sigma, and Lean principles can work to improve the hundreds of steps each patient takes through the ED experience and eliminate the wasted ones. One of the most successful initiatives I witnessed was the transition from the traditional “triage and wait” model to the “pull til full” model in a 50,000+ volume ED that closed its waiting room 75% of the time and brought patients directly into an ED space for simultaneous triage, registration and evaluation.

There is general agreement that the big money lies in the output side of the overcrowding equation. During crowded times, every hour spent in the ED by an admitted patient decreases ED efficiency and snowballs into more crowding. We have all witnessed the nearly empty ED at 0600 become overcrowded pandemonium by 1400 because admitted patients were not leaving the ED. Progress is reportedly being made as solutions are developed and adopted; bed coordinators, protocols to handle full capacity, and patient boarding in areas outside the ED are just a few examples. Once considered an area of untouchable sacred ground, some hospitals are adjusting the flow of elective admissions with the goal to “smooth” the peaks of admissions and thus accommodate the surges of ED admissions.

The ultimate consequences of overcrowding in the ED are more dire than we first thought. Overcrowding is no longer just a matter of inconvenience and dissatisfaction. It may be impossible to eliminate crowding and boarding completely due to the surges of “unscheduled care” in the ED. However, the evidence is compelling that healthcare professionals, both clinical and administrative, must band together to find and implement solutions to provide better, safer care for our patients.