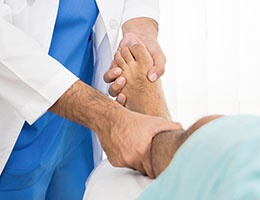 Medical errors related to vascular emergencies are common and costly. From head to toe, the vascular system is a fertile field for risk and error waiting to entangle the unwary practitioner.

This list is not complete, but represents the frequent flyers in the medical-legal world. Mishaps related to these vascular catastrophes are threats to patient safety while also making up the building blocks of a multi-million-dollar medical malpractice industry.

But aren’t we forgetting something? The aortic bifurcation is not the end of the road, and the brain, heart, lungs and abdominal organs are not the only structures requiring perfusion. Extending beyond the body’s central core are a few more useful appendages – the limbs! Since vascular emergencies involving the limbs are not as common as those in the body core, they may not get the attention and respect they deserve. Acute peripheral artery disease may merit the title of “The Rodney Dangerfield of the Vascular System.”

These morbidity and mortality statistics rival almost all other vascular emergencies. Despite advances in diagnosis and therapy, acute limb ischemia remains a serious quality and risk problem for practitioners in many specialties. Emergency physicians, primary care physicians, hospitalists, surgeons, cardiologists and radiologists are all likely to encounter patients with ALI.

Regardless of the underlying cause, ALI is the end result of inadequate perfusion. The structures distal to the obstruction do not receive oxygen and vital nutrients, and in a matter of minutes to hours, cell death and tissue damage ensue. It is tissue ischemia that is responsible for the symptoms and signs found in patients with ALI.

The classic description of ALI includes the six “Ps”: pain, pallor, paralysis, paresthesia, poikilothermia (coolness), and pulselessness. Perhaps the most important lesson to learn is that one or more of the six Ps may be absent in patients with ALI. All members of the care team must have a high index of suspicion for ALI even when some features of the “classic” clinical picture are missing.

Not all patients who complain of leg pain, numbness or weakness have acute limb ischemia. They may not have peripheral vascular disease at all, but instead may have a condition that shares some features with ALI. These diagnoses that can resemble ALI are known as “mimics of acute limb ischemia.” Knowing a little more about these mimics can assist you in making the right diagnosis in a timely fashion.

The real danger here is to miss the critical diagnosis of ALI while assuming that the patient has a less emergent condition such as peripheral neuropathy. We have reviewed several litigated cases in which a patient with ALI was initially misdiagnosed as a neurological problem rather than a vascular occlusion.

Medical training has rightfully focused on the management of conditions that impair perfusion to vital organs such as the heart, lungs and brain. Clinicians have even formed and implemented special response teams to rapidly address these critical vascular emergencies, including “Code STEMI” and “Code Stroke.” The same degree of attention has not been given to acute limb ischemia. There is no “Code Leg” or “Cold Limb Alert” in the emergency department. ALI is the ignored runt of the litter in the family of vascular emergencies.

Acute limb ischemia is a dangerous condition that can challenge even the most astute and experienced practitioner. The goal should be to improve the quality of care to patients with suspected acute limb ischemia while at the same time reducing medical errors and medical-legal risk.