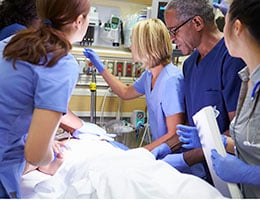 Despite almost two decades of attention and study, diagnostic error continues to be a main issue in healthcare, affecting an estimated 12 million people each year and causing harm in one-third of these cases. 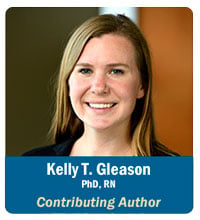 He was admitted to the surgical floor, where he was well-known to the nursing staff. He rapidly went from walking and talking at entry to reporting feeling faint in the room with a high level of anxiety. Vital signs were obtained, which showed tachycardia, hypotension, and hypoxia. A rapid response was called, and both the rapid response team and the patient’s surgical team entered the room and began troubleshooting what may be happening.

The patient turned to the nurse and told her: “My stomach…look at my stomach…it’s getting so big so fast.” The nurse immediately noticed that his stomach was rapidly enlarging, and looked to tell the team. No team member addressed the nurse, however, other than to request that she hang fluids, obtain labs, and other tasks.

The nurse set about doing the tasks and assumed that with the number of clinicians in the room, the enlarged abdomen would be rapidly identified and may have already been noted. Meanwhile, the team worked the patient up for a potential pulmonary embolism and sepsis, not asking the patient or the nurse what they were most concerned about.

The case was later discussed at a morbidity and mortality conference. No nurses from any of the units involved (ED, floor, ICU) were invited. The clinicians concluded that the missed diagnosis was due to the inability to get proper imaging related to the patient’s spinal hardware and the team not placing abdominal aortic aneurysm on their differential.

A missed diagnosis does not happen because of one reason alone; there were many reasons this diagnosis was missed. It is not solely the nurse who potentially had the key to rapid diagnosis of the abdominal aortic aneurysm. The patient and the patient’s mother both noticed the alarming changes in his abdomen. Even if neither had noticed, a physical exam would ideally have been done by a physician once the rapid response was called.

The issue in communication was bidirectional: the nurse knew the finding was concerning and wanted the team to know, but she was not fully confident in her role or her duty to interrupt to ensure the team knew about it when she had not been directly asked. The rapid response team and the surgical team had both asked the nurse to do tasks but had not asked her for her assessment of the patient.

The Nurse’s Role in the Diagnostic Process

The nurse has a responsibility to contribute to the diagnostic process. Anecdotally, this responsibility is sometimes misunderstood because of confusion over the state’s scope of practice laws regarding medical diagnosis. While some states (though not all) do explicitly state that it is outside a registered nurse’s scope of practice to medically diagnose a patient, this does not erase the role of the nurse in the diagnostic process.

Assessing the patient and communicating findings to the medical team is absolutely within a nurse’s scope of practice, and there is substantial legal precedent demonstrating that nurses were held accountable when concerning findings were not identified and communicated. Communicating with the patient, understanding the patient’s concerns, and relaying those concerns to the medical team are also undoubtedly within the role of the nurse; these are all key components of the diagnostic process.

As mentioned, the nurse’s lack of involvement in the diagnostic process, in this case, was a bidirectional issue. The solution required is also bidirectional. The nurse needs awareness that it is her/his role to share her/his assessment findings with the medical team. The medical team needs awareness that the nurse holds crucial information to the diagnostic process.

It is not a matter of the nurse needing to be particularly outspoken or confident. Performing an assessment and sharing those findings is as much a duty and a right for a nurse as administering ordered medications or obtaining labs, and this should be recognized by the entire medical team.