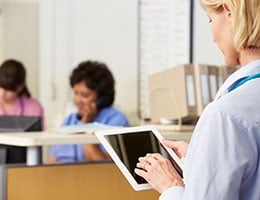 One of the most difficult hurdles to overcome during the defense of a malpractice suit is a significant discrepancy in the medical record. The discrepancies may involve the nurses, physicians, advanced practice clinicians, EMS personnel, and any records related to the patient. Often, a discrepancy may be nothing more than a minor difference in terminology; but the cases reviewed here reveal serious discrepancies between the physician and the nurse chart in the first case and the physician and EMS record in the second case. Other common examples of documentation discrepancies include:

A 39-year-old woman came to the emergency department; according to the triage nurse, she complained of “a burning feeling in my chest” accompanied by nausea. The ED physician saw the patient and recorded a history of “epigastric pain” without mention of chest pain. The patient received a GI cocktail and was discharged. She returned 24 hours later in cardiac arrest from an acute myocardial infarction.

One year later, a malpractice suit was filed against the hospital and ED physician alleging the following:

During her deposition, the ED physician testified that the patient never complained to her of chest pain and admitted that she was not aware of the nurse’s notes that indicated “a burning feeling in my chest.” Testimony by the nurse supported her own charting that the patient did indeed complain of burning chest pain. To avoid the incrimination of finger-pointing at each other by the ED physician and nurse at trial, the case was settled.

EMS was called to transport a 55-year-old man with a headache from an urgent care to a tertiary care center. The EMS transfer form stated that they were transporting the patient with a severe headache to the hospital to “rule out subarachnoid hemorrhage.” The receiving emergency physician evaluated the patient, ordered a head CT (which was negative), and discharged the patient. The patient died three days later from a ruptured cerebral aneurysm.

A malpractice suit was filed against the emergency physician alleging the following:

The emergency physician testified that he did not see the EMS transfer form that stated “rule out subarachnoid hemorrhage.” He acknowledged that the negative CT did not rule out SAH. Expert testimony insisted that a lumbar puncture was indicated following the negative CT. Furthermore, the physician’s description of the headache did not match the EMS record. The case was settled for a sizeable amount during a pre-trial mediation.

EMR documentation templates usually contain the option or recommendation to review nursing notes and state “Nursing Notes Reviewed.” This caveat is important not only for billing compliance, but it also serves to remind the practitioner to actually read the nursing triage and assessment notes and resolve any significant discrepancies at the time of the patient visit. Reviewing the notes of others on the patient care team was very easy when paper charts were in use, but this task is now extremely difficult in many EMR systems due to separate windows and locations for each member’s documentation.

Documentation templates also prompt practitioners to note any important “additional data” in the medical decision-making portion of the chart. Very often the EMS and nursing home records contain information that is crucial to patient evaluation. It is vital that these additional patient records are reviewed in order to avoid medical errors, improve patient safety, and reduce risk to both the patient and the practitioner.