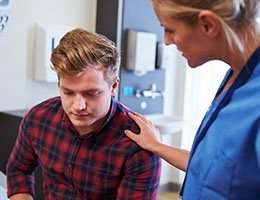 There are approximately 21 million living U.S. military veterans, and the Veterans Health Administration (VHA) is the largest health care system in the country. Despite its size, the VHA is overwhelmed by the need to provide healthcare to the huge number of eligible veterans.

As a consequence of this high demand for care, Congress enacted the Veterans Access, Choice, and Accountability Act of 2014, which allows veterans to seek government-funded care in the private sector under certain circumstances. This act may cause an influx of veterans into private physician practices.

The provision of healthcare for veterans, particularly those who have been deployed in a theater of war, can be challenging, and the presentation of symptoms may not always be what it appears.

Mental health issues, traumatic brain injury, infectious diseases, and residual effects of chemical exposure are some of the conditions that may be inaccurately ascribed to other causes if the veteran’s service history is not considered. Key points regarding these conditions are highlighted below.

Want to learn more for CME?

Check out our course on this topic: Veterans' Healthcare Issues