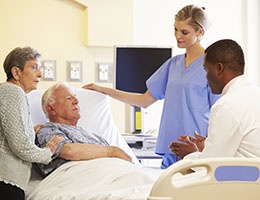 A 78-year-old man, Mr. S, came to the emergency department with the chief complaint of abdominal pain. He was an active person, residing in the independent living section of a retirement complex. He described the pain as an ache in the mid and lower abdomen that had been present for several days. The pain did not radiate. He denied any fever, nausea, vomiting or diarrhea. He claimed having no appetite or bowel movement “for days.”

The exam showed him to be uncomfortable, with unremarkable vital signs. Palpation of his abdomen revealed distention and moderate tenderness below the umbilicus. There was no appreciable guarding, rigidity or rebound tenderness.

The patient was placed in a private back room in the ED; enemas were administered to relieve his “constipation.” The nurse informed the physician that the first enema produced no results. Over several hours and without re-examining the patient, the physician ordered additional enemas, which were administered with little or no results. Meanwhile, Mr. S became increasingly uncomfortable due to worsening lower abdominal pain.

At the urging of the concerned nurse, the emergency physician eventually re-examined Mr. S many hours after his arrival in the ED. By this time, Mr. S was groaning due to abdominal pain, and appeared to be more ill, with increased abdominal distention and tenderness.

Litigation resulted in a confidential settlement by the defendant emergency physician and hospital.

This rather dramatic case of “enemas until dead” is packed with obvious vulnerabilities on the part of the emergency physician. The medico-legal categories of identifiable error include at least the following:

If the nurse who administered the enemas observed that Mr. S’s pain was actually worsening rather than achieving any relief, a prudent course would have been to insist that the physician re-examine the patient prior to continuing the enemas.

Now try to approach this case from the perspective of clinical decision-making. Put on your error analysis hat and consider the question: “What was the physician really thinking?”

It is evident that the physician made an assumption very early in the course of treatment that the problem was constipation. Mr. S was somewhat distended and tender and complained of no bowel movement for days. Constipation was certainly one of the possible diagnoses.

However, constipation was not the only diagnosis to consider. In the patient who presents with abdominal pain, there are many other potentially more serious causes. Constipation is a diagnosis of exclusion, particularly in the geriatric age group.

For whatever reason, the physician’s thinking locked onto the reported history of “no bowel movement for days.” This tendency to fixate on certain features of the patient’s presentation too early in the workup is known as anchoring. It is one of the most common, powerful and problematic cognitive dispositions to respond (CDRs) identified in medical errors.

The term “anchoring” is appropriate because it describes something that is stuck and immovable. In this case, it was the physician’s thought process that got stuck. Immediately after the initial history and exam, he narrowly focused on the history of “no appetite or bowel movement for days.” Once the anchor of constipation was attached to the patient, it was difficult to remove for several hours. By that time, the anchor had caused irreparable damage.

Think of your own examples of “anchors” you attach to certain patients. Be especially aware of the anchors that are assigned to our “frequent flyer” population. This is a high-risk group because of our tendency to not take their complaints seriously or because they are diagnosed as “the migraine,” “the gall bladder,” or “the back pain” even before assessment and testing. Could the migraine be a subarachnoid hemorrhage (SAH)? Could the gall bladder pain be an acute coronary syndrome (ACS)? Could the back pain be a thoracic aortic dissection (TAD)?

It is not difficult to imagine that the habit of anchoring is the frequent entryway to other cognitive errors. Anchoring is often seen in combination with other biases, which together result in delayed or missed diagnoses. In this case, anchoring on the prominent feature of “no bowel movement for days” led to a related CDR known as premature closure.

In circumstances when thought processes are not at their sharpest, premature closure might unfortunately be used as a subconscious crutch to “get to the finish line” by hastily arriving at an unverified diagnosis. Stress, fatigue and circadian rhythm disruption are examples of common conditions that may serve to dull the sharp cognitive edge required of the patient care team. These factors may predispose one to premature closure.

In the quest to make the diagnosis, it is only natural to have a gut feeling and formulate an initial guess as to the etiology of a patient’s condition. There can be a certain amount of satisfaction in rapidly arriving at the correct diagnosis. This early hunch may indeed be correct, but it may also serve as a barrier to an open-minded and thorough evaluation.

Errors in decision-making related to the cognitive shortcuts of anchoring and premature closure can be avoided by adopting the following strategies:

All of these concepts are covered in extensive detail in our online courses: