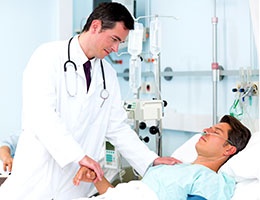 Many diagnostic errors involve some degree of cognitive bias or errors; here is an actual case that illustrates this point.

L.B. is a 46-year-old man with onset of illness 12 days prior that started with cold symptoms, sore throat, rhinorrhea, cough, and fever up to 100.7°F (38.1°C). Since then, he has been getting progressively weaker, to the point that he could not walk to the EMS vehicle.His past history includes bipolar illness, alcoholism, depression and anxiety. He reports no alcohol intake for 3 months and no complications related to his alcoholism. He was on several medications. He is a smoker, denies drug abuse, is unemployed, and lives with his mother.

The vital signs were entirely normal. The physical exam showed him to be an awake, alert, oriented, weak-appearing, poorly conditioned man. His affect was depressed. HEENT, neck, heart, lungs, abdomen skin and extremities were normal. The neurological exam showed: CN intact, weak but equal grasp, can lift both legs off the bed. He refuses to walk and can barely sit up with assistance. Diagnostic tests including CBC, chem 7, liver profile, troponin, urinalysis, ECG, and chest X-ray were all normal.

Since L.B. had normal vital signs and normal diagnostic tests, the emergency physician (EP) considered discharging him home if he could walk at all. Since he was apparently unable to sit up by himself much less ambulate, the EP decided to admit him.

The EP’s medical reasoning consisted of the following: “Patient with history of alcoholism and mental illness complains of weakness for past 12 days. No alcohol intake for months. There is no evidence of acute cardiac, pulmonary, encephalopathic or hepatic processes. He can barely sit up with assistance and is not willing to try to walk. There is no focal weakness. With this onset of acute weakness, he will require hospital admission. As there is no evidence of organic pathology to explain his weakness, this may be on a psychiatric basis.”

Upon admission, L.B. became progressively weaker and was transferred to ICU. During the night, respiratory failure ensued and he required intubation and mechanical ventilation. A head CT was normal. A lumbar puncture was normal except for a slightly elevated CSF protein of 65. The neurology consultant performed a bedside EMG/NCV that was consistent with a demyelinating type of peripheral neuropathy. L.B. was diagnosed with Guillain-Barre syndrome, and plasmapheresis was started. He recovered after a long illness.

The EP in this case acknowledged that a huge cloud of bias overshadowed his evaluation of this patient. Here are some observations made in the analysis of this case:

Several cognitive errors were committed in this near-miss case. Practitioners should review the most common cognitive errors and be wary of their influence on medical decision-making. Normal vital signs and test results do not exclude the possibility of serious life-threatening disease. The neurological exam is the most ignored and incomplete part of patient evaluation. A detailed neuro exam is essential in every patient with a complaint of weakness, numbness, headache, incoordination, speech problems or altered mental status. Before approaching each patient, clear your mind of bias. Listen to, and when in doubt, believe the patient.